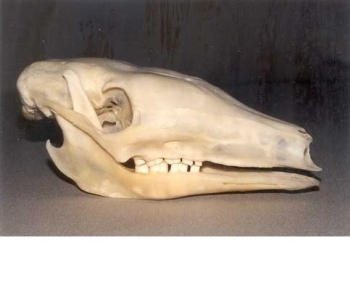 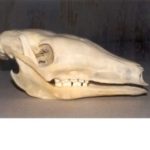 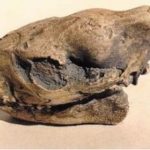 Archaeotherium Skull Replica
0 out of 5
( There are no reviews yet. )

Aardvark Skull Replica is Museum quality cast in Polyurethane resins. The Aardvark Skull Replica measures 230mm or 9 inches and is made in USA. The Aardvark or Orycteropus afer Digging foot is a medium-sized, burrowing, nocturnal mammal native to Africa. It is sometimes called an ant bear, anteater, Cape anteater after the Cape of Good Hope, earth hog or earth pig.The Aardvark is found in Central and lower Africa, feeds on termites and ants and is the only living species of the order Tubulidentata.

The aardvark is vaguely pig-like in appearance. Its body is stout with a prominently arched back and is sparsely covered with coarse hairs. The limbs are of moderate length, with the rear legs being longer than the forelegs. The front feet have lost the pollex (or ‘thumb’), resulting in four toes, while the rear feet have all five toes. Each toe bears a large, robust nail which is somewhat flattened and shovel-like, and appears to be intermediate between a claw and a hoof.

An aardvark’s weight is typically between 130–180 lbs. An aardvark’s length is usually between 3.44–4.27 feet, and can reach lengths 7 feet 3 in. It is 60 24 in. tall at the shoulder. It is the largest member of the proposed clade Afroinsectiphilia. The aardvark is pale yellowish-gray in color and often stained reddish-brown by soil. The aardvark’s coat is thin, and the animal’s primary protection is its tough skin. Its hair is short on its head and tail; however its legs tend to have longer hair. The hair on the majority of its body is grouped in clusters of 3-4 hairs. The hair surrounding its nostrils is dense to help filter particulate matter out as it digs. Its tail is very thick at the base and gradually tapers.

The greatly elongated head is set on a short, thick neck, and the end of the snout bears a disc, which houses the nostrils. It contains a thin but complete zygomatic arch. The head of the aardvark contains many unique and different features. One of the most distinctive characteristics of the Tubulidentata is their teeth. Instead of having a pulp cavity, each tooth has a cluster of thin, hexagonal, upright, parallel tubes of vasodentin, with individual pulp canals, held together by cementum. The teeth have no enamel coating and are worn away and regrow continuously.