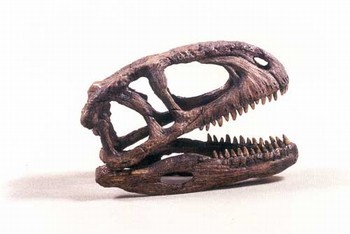 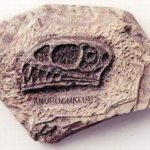 Anurognathus Plaques
0 out of 5
( There are no reviews yet. )

Abelisaurus (“Abel’s lizard”) is a genus of abelisaurid theropod dinosaur from the Late Cretaceous Period.  It was a bipedal carnivore that probably reached 25 to 30 feet (7 to 9 meters) in length, although it is known from only one partial skull.

As only the skull is known, it has proven difficult to provide a reliable size estimate of Abelisaurus. It has transpired that abelisaurids have relatively short heads.

Skull length was estimated at 33 3⁄4 in. in 1985. The skull is relatively deep. Although there are no bony crests or horns, like those found in some other abelisaurids, such as Carnotaurus, rough ridges on the snout and above the eyes might have supported some kind of crest made out of keratin, which would not have become fossilized. The skull roof is thickened. There are also very large fenestrae (window-like openings) in the skull, which are found in many dinosaurs and reduce skull weight. One of these is a large triangular antorbital fenestra in the side of the snout. The eye socket behind it is rather high. It is constricted in the middle by bony projections of the lacrimal bone in the front and the postorbital bone at the rear. The eye was located above the constriction. Behind the eye socket a large triangular infratemporal fenestra is present. Its form reflects a strong forward inclination of the back of the skull.

The front snout bone, the praemaxilla, bore four relatively small teeth. The maxilla behind it had at least seven, but perhaps as many as thirteen, larger teeth