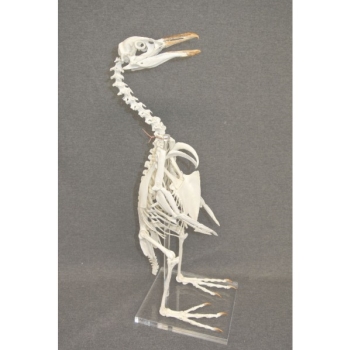 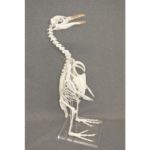 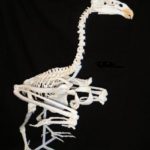 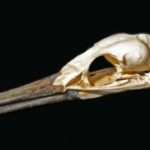 Brandts Cormorant Female Skull Replica
0 out of 5
( There are no reviews yet. )

The African penguin, (Spheniscus demersus), also known as the Cape penguin, and South African penguin, is a species of penguin confined to southern African waters. Like all extant penguins, it is flightless, with a streamlined body, and wings stiffened and flattened into flippers for a marine habitat. Adults weigh on average 4.9–7.7 lbs. and are 24–28 in. tall. It has distinctive pink patches of skin above the eyes and a black facial mask; the body upper parts are black and sharply delineated from the white underparts, which are spotted and marked with a black band. The pink gland above their eyes helps them to cope with changing temperatures. When the temperature gets hotter, the body of the African penguin sends more blood to these glands to be cooled by the air surrounding it. This then causes the gland to turn a darker shade of pink.

The African penguin is a pursuit diver and feeds primarily on fish and squid. Once extremely numerous, the African penguin is declining rapidly due to a combination of several threats and is classified as endangered. It is a charismatic species and is popular with tourists. Other vernacular names of the species include black-footed penguin and jackass penguin, which it is called due to its loud donkey-like bray, although several related species of South American penguins produce the same sound.

Juveniles do not possess the bold, delineated markings of the adult but instead have dark upper parts that vary from greyish-blue to brown; the pale underparts lack both spots and the band. The beak is more pointed than that of the Humboldt. Their distinctive black and white coloring is a vital form of camouflage called countershading– white for underwater predators looking upwards and black for predators looking down onto the dark water. African penguins look similar and are thought to be related to the Humboldt, Magellanic, and Galapagos penguins. African penguins have a very recognisable appearance with a thick band of black that is in the shape of an upside-down horseshoe. They have black feet and unique black spots that vary in size and shape per penguin.