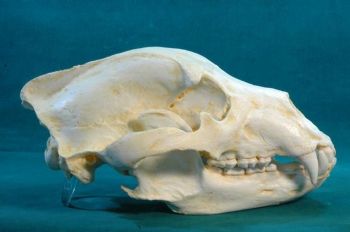 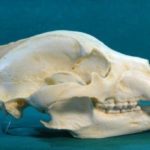 Polar Bear Ursus maritimus Articulated Front Foot Replica
0 out of 5
( There are no reviews yet. )

The Kodiak bear (Ursus arctos middendorffi or Ursus arctos horribilis), also known as the Kodiak brown bear, sometimes the “Alaskan brown bear”, inhabits the islands of the Kodiak Archipelago in southwest Alaska. It is the largest recognized subspecies or population of the brown bear, and one of the two largest bears alive today, the other being the polar bear.

Physiologically, the Kodiak bear is very similar to the other brown bear subspecies, such as the mainland grizzly bear (Ursus arctos horribilis) and the now-extinct California grizzly bear, with the main difference being in size. While there is generally much variation in size between brown bears in different areas, most usually weigh between 115 and 360 kg (254 and 794 lb). The Kodiak bear, on the other hand, commonly reaches sizes of 300 to 600 kg (660 to 1,320 lb), and has even been known to exceed weights of 680 kg (1,500 lb). Despite this large variation in size, the diet and lifestyle of the Kodiak bear does not differ greatly from that of other brown bears.

Encounters between humans and Kodiak bears have been very infrequent since ancient times. Today, these encounters have become more common as a result of the increase in the human population in the region. Such encounters have included the hunting of bears by humans for their fur or meat, and, less commonly, attacks by bears upon humans. More recently, as conservation efforts have become more commonplace, concerns over the sustenance and stability of the Kodiak bear population have arisen. The IUCN classifies Ursus arctos, the species to which the Kodiak belongs, as being of “least concern” in terms of endangerment or extinction. However, the IUCN does not differentiate between subspecies; therefore, it is unknown whether the Kodiak bear population is as healthy as is stated. As a result, the Alaska Department of Fish and Game, along with, to a lesser extent, the United States Fish and Wildlife Service, closely monitors the number of bears hunted in the state.

Hair colors range from blonde to orange (typically females or bears from southern parts of the archipelago) to dark brown. Cubs often retain a white “natal ring” around their neck for the first few years of life. The Kodiak bear’s color is similar to that of its close relatives, the mainland American and Eurasian brown bears.