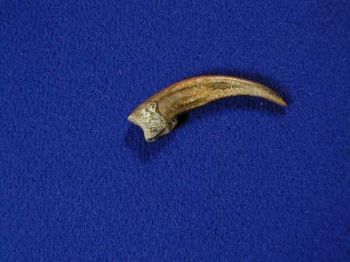 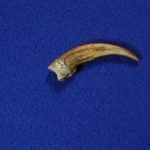 American Badger Hind Claw is cast in polyurethane resins and is Museum Quality. Made in the USA. American Badger hind claw measures 1.8 inches or 5cm. Taxidea taxus is the scientific name. Our percise can be used as a teaching tool, museum claw exhibit, home decor claw, or office decor claw.

The American badger or Taxidea taxus has most of the general characteristics common to badgers; with stocky and low-slung bodies with short, powerful legs, they are identifiable by their huge fore-claws (measuring up to 5 cm in length) and distinctive head markings. Except for the head, the American badger or Taxidea taxus is covered with a grizzled, brown, black and white coat of coarse hair or fur, giving almost a mixed brown-tan appearance. The coat aids in camouflage in grassland habitat. Its triangular face shows a distinctive black and white pattern, with brown or blackish “badges” marking the cheeks and a white stripe extending from the nose to the base of the head.

Taxidea taxus is a North American badger is found in the western and central United States, northern Mexico, and south-central Canada to certain areas of southwestern British Columbia.

The American badger or Taxidea taxus habitat is typified by open grasslands with available prey (such as mice, squirrels, and groundhogs). The species prefers areas such as prairie regions with sandy loam soils where it can dig more easily for its prey.

American badger or Taxidea taxus possess morphological characteristics that enables them to be good fossorial specialists such as a conical head, bristles on the ears and nictitating membranes in the eyes. American badgers have powerful forelimbs. They also possess a strong humerus and large bony processes for the attachment of muscles. The mechanical advantage in badger forelimbs is increased by the specialized olecranon process and bones such as the radius and metacarpals.

The American badger or Taxidea taxus is a fossorial carnivore. It preys predominantly on pocket gophers, ground squirrels, moles, marmots, prairie dogs, pika, woodrats, kangaroo rats, deer mice, and voles, often digging to pursue prey into their dens, and sometimes plugging tunnel entrances with objects. The American badger or Taxidea taxusis a significant predator of snakes including rattlesnakes, and is considered the most important predator of rattlesnakes in South Dakota.