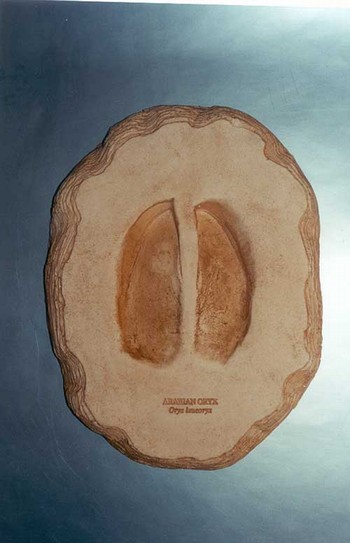 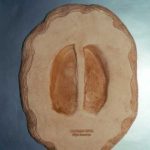 Arabian Oryx Footprint Cast Replica Models – Animal Tracks are an invaluable asset to science teachers, naturalists and zoo workers. These educational plaques, made of extremely durable plastic, are actually cast from the authentic footprints left behind by each animal described.

The Arabian oryx or white oryx (Oryx leucoryx) is a medium-sized antelope with a distinct shoulder bump, long, straight horns, and a tufted tail. It is a bovid, and the smallest member of the genus Oryx, native to desert and steppe areas of the Arabian Peninsula. The Arabian oryx was extinct in the wild by the early 1970s, but was saved in zoos and private preserves, and was reintroduced into the wild starting in 1980.

The diets of the Arabian oryx consist mainly of grasses, but they eat a large variety of vegetation, include buds, herbs, fruit, tubers and roots. Herds of Arabian oryx follow infrequent rains to eat the new plants that grow afterward. They can go several weeks without water. Research in Oman has found grasses of the genus Stipagrostis are primarily taken; flowers from Stipagrostis plants appeared highest in crude protein and water, while leaves seemed a better food source with other vegetation.

When the oryx is not wandering its habitat or eating, it digs shallow depressions in soft ground under shrubs or trees for resting. They are able to detect rainfall from a distance and follow in the direction of fresh plant growth. Arabian oryx tend to maintain visual contact with other herd members, subordinate males taking positions between the main body of the herd and the outlying females. If separated, males will search areas where the herd last visited, settling into a solitary existence until the herd’s return.