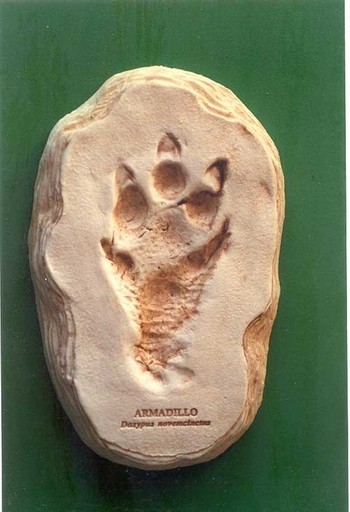 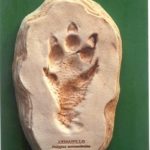 Armadillo Footprint Cast Replica Animal Tracks are an invaluable asset to science teachers, naturalists and zoos. These educational plaques, made of extremely durable plastic, are actually cast from the authentic footprints left behind by each animal described. Our precise footprint can be used as a teaching tool, museum footprint exhibit, home decor footprint, or office decor footprint.

Armadillos (meaning “little armoured one” in Spanish) are New World placental mammals in the order Cingulata. The Chlamyphoridae and Dasypodidae are the only surviving families in the order, which is part of the superorder Xenarthra, along with the anteaters and sloths. Nine extinct genera and 21 extant species of armadillo have been described, some of which are distinguished by the number of bands on their armour. All species are native to the Americas, where they inhabit a variety of different environments.

Armadillos are characterized by a leathery armour shell and long sharp claws for digging. They have short legs, but can move quite quickly. The average length of an armadillo is about 30 in., including tail. When threatened by a predator, Tolypeutes species frequently roll up into a ball.

They are prolific diggers. Many species use their sharp claws to dig for food, such as grubs, and to dig dens. The nine-banded armadillo prefers to build burrows in moist soil near the creeks, streams, and arroyos around which it lives and feeds. The diets of different armadillo species vary, but consist mainly of insects, grubs, and other invertebrates. Some species, however, feed almost entirely on ants and termites.

Armadillos have very poor eyesight, and use their keen sense of smell to hunt for food. They use their claws for digging and finding food, as well as for making their homes in burrows. They dig their burrows with their claws, making only a single corridor the width of the animal’s body. They have five clawed toes on their hind feet, and three to five toes with heavy digging claws on their fore feet.