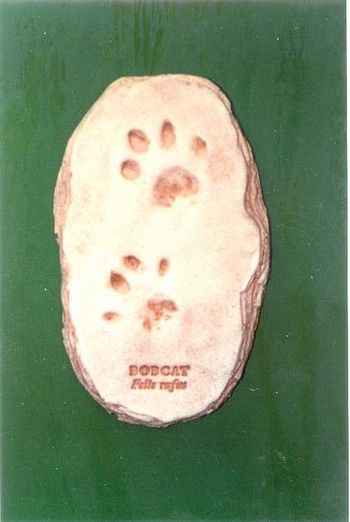 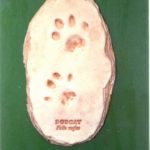 Baby Bobcat Footprint Cast. Animal Tracks are an invaluable asset to science teachers, naturalists and zoos. These educational plaques, made of extremely durable plastic, are actually cast from the authentic footprints left behind by each animal described. Cast measures 2.6 inches.

The bobcat or Lynx rufus is a medium-sized North American cat that first appeared during the Irvingtonian stage around 1.8 million years ago. The bobcat or Lynx rufus resembles other species of the midsize genus Lynx, but is on average the smallest of the four. Its coat is variable, though generally tan to grayish-brown, with black streaks on the body and dark bars on the forelegs and tail. Its spotted patterning acts as camouflage. The Bobcat or Lynx rufus ears are black-tipped and pointed, with short, black tufts. Generally, an off-white color is seen on the lips, chin, and underparts.

Bobcat or Lynx rufus in the desert regions of the southwest have the lightest-colored coats, while those in the northern, forested regions are darkest. Kittens are born well-furred and already have their spots. A few melanistic bobcats have been sighted and captured in Florida. They appear black, but may still exhibit a spot pattern.

Lynx rufus is an adaptable predator inhabiting wooded areas, as well as semidesert, urban edge, forest edge, and swampland environments. It remains in some of its original range, but populations are vulnerable to local extinction (“extirpation”) by coyotes and domestic animals.

Though the bobcat or Lynx rufus prefers rabbits and hares, it hunts insects, chickens, geese, other birds, small rodents, and deer. Prey selection depends on location and habitat, season, and abundance. Like most cats, the bobcat is territorial and largely solitary, although with some overlap in home ranges. It uses several methods to mark its territorial boundaries, including claw marks and deposits of urine or feces. The bobcat or Lynx rufus breeds from winter into spring and has a gestation period of about two months.