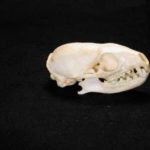 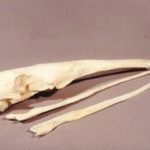 Bairds Tapir Hind Foot Replica measures 11.9 inches (30cm). Bairds Tapir Hind Foot Replica is Museum quality replica cast in Polyurethane resins. Made in USA. Tapirus bairdii. Lower Mexico to Columbia and Eastern Ecuador. Endangered. The Baird’s tapir (Tapirus bairdii), also known as the Central American tapir, is a species of tapir native to Mexico, Central America and northwestern South America. It is one of four Latin American species of tapir. Baird’s tapir has a  cream-colored marking on its face and throat and a dark spot on each cheek, behind and below the eye. The rest of its hair is dark brown or grayish brown. This tapir is the largest of the four American species and the largest native land mammal in both Central and South America.

The gestation period is about 400 days, after which one offspring is born. Multiple births are extremely rare. The babies, as with all species of tapir, have reddish-brown hair with white spots and stripes, a camouflage which affords them excellent protection in the dappled light of the forest. This pattern eventually fades into the adult coloration.

For the first week of their lives, infant Baird’s tapirs are hidden in secluded locations while their mothers forage for food and return periodically to nurse them. Later, the young follow their mothers on feeding expeditions. At three weeks of age, the young are able to swim. Weaning occurs after one year, and sexual maturity is usually reached six to 12 months later. Baird’s tapirs can live for over 30 years.

Baird’s tapir may be active at all hours, but is primarily nocturnal. It forages for leaves and fallen fruit, using well-worn tapir paths which zig-zag through the thick undergrowth of the forest. The animal usually stays close to water and enjoys swimming and wading – on especially hot days, individuals will rest in a watering hole for hours with only their heads above water.