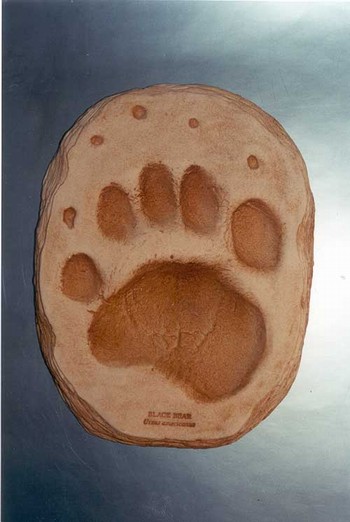 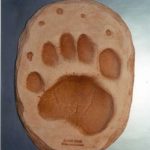 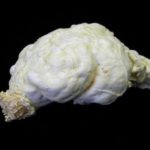 Black Bear Footprint Cast Replica Model. Animal Tracks are an invaluable asset to science teachers, naturalists and zoos. These educational plaques, made of extremely durable plastic, are actually cast from the authentic footprints left behind by each animal described. Cast measures 5.8 inches.

It is listed by the International Union for Conservation of Nature (IUCN) as a least-concern species, due to its widespread distribution and a large population estimated to be twice that of all other bear species combined. Along with the brown bear, it is one of only two of the eight modern bear species not considered by the IUCN to be globally threatened with extinction. American black bears often mark trees using their teeth and claws as a form of communication with other bears, a behavior common to many species of bears. Despite living in North America, American black bears are not closely related to brown bears and polar bears; genetic studies reveal that they split from a common ancestor 5.05 million years ago. American and Asian black bears are considered sister taxa and are more closely related to each other than to the other modern species of bears. According to recent studies, the sun bear is also a relatively recent split from this lineage.