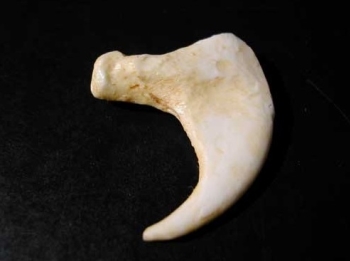 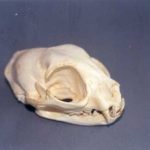 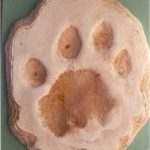 Mountain Lion Footprint Cast
0 out of 5
( There are no reviews yet. )

Bobcat Front Claw Replica measures 0.9 in. or 2cm. The Bobcat Front Claw Replica is Museum quality Polyurethane cast made in USA. Lynx rufus. The most common wildcat in North America, the bobcat is named for its short, bobbed tail. They are medium-sized cats and are slightly smaller but similar in appearance to their cousin, the lynx. Their coats vary in color from shades of beige to brown fur with spotted or lined markings in dark brown or black.

The bobcat resembles other species of the midsize genus Lynx, but is on average the smallest of the four. Its coat is variable, though generally tan to grayish-brown, with black streaks on the body and dark bars on the forelegs and tail. Its spotted patterning acts as camouflage. The ears are black-tipped and pointed, with short, black tufts. Generally, an off-white color is seen on the lips, chin, and underparts. Bobcats in the desert regions of the southwest have the lightest-colored coats, while those in the northern, forested regions are darkest. Kittens are born well-furred and already have their spots. A few melanistic bobcats have been sighted and captured in Florida. They appear black, but may still exhibit a spot pattern.

The face appears wide due to ruffs of extended hair beneath the ears. Bobcat eyes are yellow with black pupils. The nose of the bobcat is pinkish-red, and it has a base color of gray or yellowish- or brownish-red on its face, sides, and back. The pupils are round, black circles and will widen during nocturnal activity to maximize light reception. The cat has sharp hearing and vision, and a good sense of smell. It is an excellent climber, and swims when it needs to, but normally avoids water. However, cases of bobcats swimming long distances across lakes have been recorded.