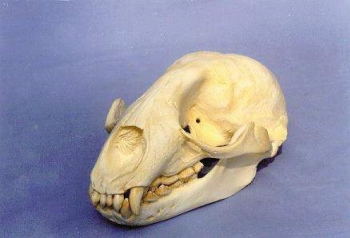 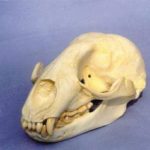 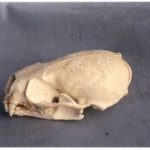 Carribbean Monk Seal Skull Replica measures 8.5 inches or 22cm. The Carribbean Monk Seal Skull Replica is Museum quality Polyurethane cast made in USA. The Caribbean monk seal, West Indian seal or sea wolf has not been found in the wild since 1952 and is believed to be extinct. Historically, this species was found throughout the Caribbean and Gulf Of Mexico. This species was very abundant prior to the settlement of North America by Europeans. The monk seals lack of fear towards humans and gregarious basking made them easy prey for their meat and oil. Caribbean monk seals had a relatively large, long, robust body, could grow to nearly 8 feet in length. The head was rounded with an extended broad muzzle. The face had relatively large wide-spaced eyes, upward opening nostrils, and fairly big whisker pads with long light-colored and smooth whiskers. Their diet most likely consisted of fish and crustaceans. It is believed this animal’s average lifespan was approximately twenty years. Their scientific name is Monachus tropicalis.