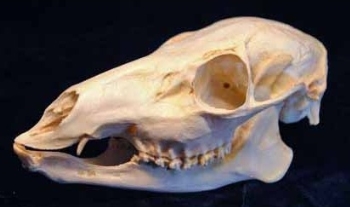 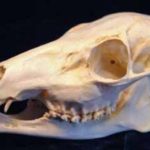 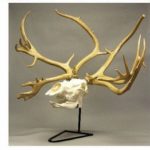 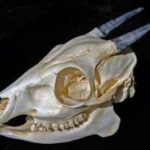 Bay Duiker Skull Replica
0 out of 5
( There are no reviews yet. )

The Chinese water deer has narrow pectoral and pelvic girdles, long legs, and a long neck. The powerful hind legs are longer than the front legs, so that the haunches are carried higher than the shoulders. They run with rabbit-like jumps. The groin of each leg is an inguinal gland used for scent marking; this deer is the only member of the Cervidae to possess such glands. The short tail is no more than 3.8 inches in length and is almost invisible, except when it is held raised by the male during the rut. The ears are short and very rounded, and both sexes lack antlers.

The Chinese Water Deer coat is an overall golden brown color, and may be interspersed with black hairs, while the undersides are white. The strongly tapered face of the Chinese Water Deer is reddish brown or gray in color, and the chin and upper throat are cream colored. The hair is longest on the flanks and rump. In the fall, the summer coat is gradually replaced by a thicker, coarse-haired winter coat that varies from light brown to grayish brown. Neither the head nor the tail poles are well differentiated as in gregarious deer; consequently, the Chinese Water Deer  deer’s coat is little differentiated. Young are born dark brown with white stripes and spots along their upper torso.