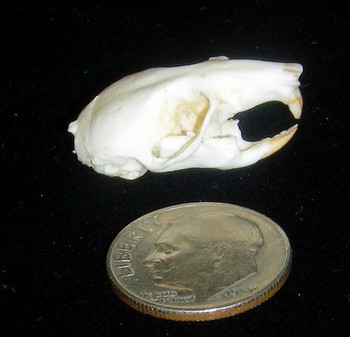 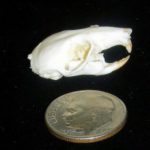 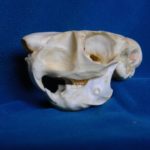 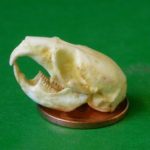 Meadow Vole Skull Replica
0 out of 5
( There are no reviews yet. )

The Deer mouse or Peromyscus maniculatus is a rodent native to North America. It is most commonly called the Deer Mouse, although that name is common to most species of Peromyscus and is fairly widespread across the continent, with the major exception being the southeast United States and the far north.

The deer mouse or Peromyscus maniculatus has a small body size, no longer than that of a house mouse. It is typically 119 to 222 mm long and weighs between 10 and 24 grams. Tail length is variable in different populations and ranges from 45 mm to 105 mm. Deer mouse or Peromyscus maniculatus have a round and slender body. The head has a pointed nose with large, black, beady eyes. The Deer mouse ears are large and have little fur covering them. The whiskers are long and prominent. They have shorter forelimbs than hind limbs

The Deer mouse or Peromyscus maniculatus fur is grayish to reddish brown with white underparts. The Deer mouse fur is short, soft, and dense. The finely-haired tail is bi-colored, the darker top half and the lighter bottom sharply differentiated. Generally they have hind feet that are 22 mm or less.

A female deer mouse  or Peromyscus maniculatus construct nests using a variety of materials including grasses, roots, mosses, wool, thistledown, and various artificial fibers. The male deer mice are allowed by the female to help nest the litter and keep them together and warm for survival.

In a study, less than half of both male and female deer mice left their original home range to reproduce. This means that there is intrafamilial mating and that the gene flow among deer mice as a whole is limited.

There have been recent studies that reveal deer mice also have OCD-like behaviors from altered gut microbiota. This phenomenon is typically shown in their abnormally large nest sizes and the behavior is present within 8 weeks of birth.