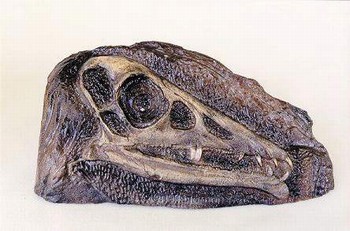 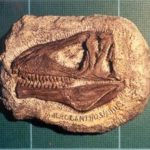 Eudimorphodon Skull Plaque is of museum quality and cast in durable polyurethane resins. Made in USA. An early Pterosaur to Triassic Italy, 200 Million years ago. Skull and teeth at true size and detail. Ready to hang on your wall for that perfect prehistoric accent.

Eudimorphodon was a pterosaur that was discovered in 1973. The nearly complete skeleton was retrieved from shale deposited during the Late Triassic (mid to late Norian stage), making Eudimorphodon one of the oldest pterosaurs known. It had a wingspan of about 3.3 ft. and at the end of its long bony tail may have been a diamond-shaped flap like in the later Rhamphorhynchus. Eudimorphodon is known from several skeletons, including juvenile specimens.

Eudimorphodon was a small pterosaur, being 3.3 ft. in length, and weighing no more than 22 lbs. Its fourth finger had a very large size, and attached to the membrane making up the wing.

Eudimorphodon showed a strong differentiation of the teeth. It also possessed a large number of these teeth, a total of 110 of them densely packed into a jaw only six centimeters long. The front of the jaw was filled with fangs, per side four in the upper jaw, two in the lower jaw, that rather abruptly gave way to a line of smaller multi-pointed teeth, 25 in the upper jaw, 26 in the lower jaw, most of which had five cusps.

The morphology of the teeth are suggestive of a piscivorous diet, which has been confirmed by preserved stomach contents containing the remains of fish of the genus Parapholidophorus. Eudimorphodon had slightly differing dentition with fewer teeth and may have had a more insectivorous diet. The top and bottom teeth of Eudimorphodon came into direct contact with each other when the jaws were closed, especially at the back of the jaw. This degree of dental occlusion is the strongest known among pterosaurs. The teeth were multi-cusped, and tooth wear shows that Eudimorphodon was able to crush or chew its food to some degree. Wear along the sides of these teeth suggests that Eudimorphodon also fed on hard-shelled invertebrates.