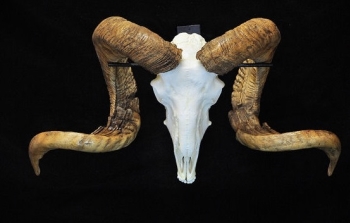 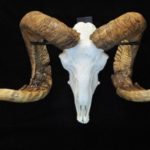 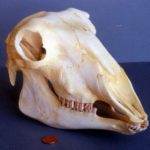 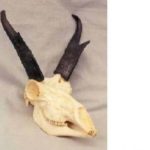 American Pronghorn Skull Replica
0 out of 5
( There are no reviews yet. )

Merino Male Sheep Ram Skull with Horns Replica Horn Length: 38 inches or 97cm each. The Merino Male Sheep Ram Skull with Horns Replica is Museum quality Polyurethane cast made in USA. Ovis aries -private collection. Metal mount included. Male Domestic Sheep, called Rams. The Merino sheep or Jackson sheep is an economically influential breed of sheep prized for its wool. The breed originated in Spain, but the modern Merino was domesticated in New Zealand and Australia. Today, Merinos are still regarded as having some of the finest and softest wool of any sheep.

Merino is an excellent forager and very adaptable. It is bred predominantly for its wool, and its carcass size is generally smaller than that of sheep bred for meat. Merino has been domesticated and bred in ways that would not allow them to survive well without regular shearing by their owners. They must be shorn at least once a year because their wool does not stop growing. If this is neglected, the overabundance of wool can cause heat stress, mobility issues, and even blindness.

The term merino is widely used in the textile industries, but it cannot be taken to mean the fabric in question is actually 100% merino wool from a Merino strain bred specifically for its wool. The wool of any Merino sheep, whether reared in Spain or elsewhere, is known as “merino wool”. However, not all merino sheep produce wool suitable for clothing, and especially for clothing worn next to the skin or as a second skin. This depends on the particular strain of the breed. Merino sheep bred for meat do not produce a fleece with a fine enough.

Spain became noted for its fine wool (spinning count between 60s and 64s) and built up a fine wool monopoly between the 12th and 16th centuries, with wool commerce to Flanders and England being a source of income for Castile in the Late Middle Ages.