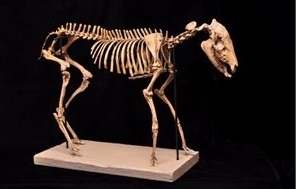 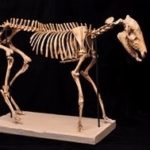 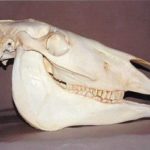 Domestic Horse Skull Replicas Models
0 out of 5
( There are no reviews yet. )

Mesohippus Skeleton Replica measures 36″ Height, 22″ width. The Mesohippus Skeleton Replica is Museum quality  Polyurethane cast made in USA. Mounted. Please call 509-951-3557 for shipping quote. Mesohippus had low crowned teeth that would have been well suited to browsing leaves from bushes, small trees, and fruit. Its long tail was over 1/4 its total body length.  North American horses including Mesohippus had 17 thoracic vertebrae, while European horses had 18.

Mesohippus had long legs and stood 6 hands tall. This equid is the first fully tridactyl horse in the evolutionary record, with the third digit being longer and larger than its second and fourth digits. Mesohippus had pads like seen in Hyracotherium and Orohippus. The face of Mesohippus was longer and larger than earlier equids. It had a slight facial depression, in the skull. The eyes were rounder, and were set wider apart and farther back than in Hyracotherium. It’s scientific name is Mesohippus barbouri.

Fossils of Mesohippus, the next important ancestor of the modern horse, are found in the early and middle Oligocene of North America (the Oligocene Epoch lasted from about 33.9 million to 23 million years ago). Mesohippus was far more horse like than its Eocene ancestors: it was larger (averaging about 6 hands [about 61 cm, or 24 inches] high); the snout was more muzzle like; and the legs were longer and more slender. Mesohippus also had a larger brain. The fourth toe on the forefoot had been reduced to a vestige, so that both the forefeet and hind feet carried three functional toes and a footpad. The teeth remained adapted to browsing.

By the late Oligocene, Mesohippus had evolved into a somewhat larger form known as Miohippus.