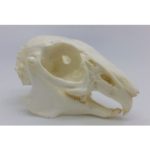 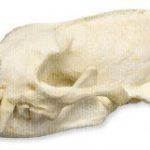 African Striped Weasel Skull Replica
0 out of 5
( There are no reviews yet. )

Porcupines are usually dark brown or black in color, with white highlights. They have a stocky body, a small face, short legs, and a short, thick tail.  The head-and-body length is 60 to 90 cm (2.0 to 3.0 ft).

The porcupine is the only native North American mammal with antibiotics in its skin. Those antibiotics prevent infection when a porcupine falls out of a tree and is stuck with its own quills upon hitting the ground. Porcupines fall out of trees fairly often because they are highly tempted by the succulent buds and twigs at the ends of the branches. The porcupine, the wolverine, and the skunk are the only North American mammals that have strongly contrasting black-and-white coloration, because they are the only mammals that benefit from letting other animals know where and what they are in the dark of night. The most distinguishing feature of the porcupine is its coat of quills. An adult porcupine has about 30,000 quills that cover all of its body except its underbelly, face, and feet.

Quills are modified hairs formed into sharp, barbed, hollow spines. They are used primarily for defense, but also serve to insulate their bodies during winter. Porcupines do not throw their quills, but when threatened, they contract the muscles near the skin, which causes the quills to stand up and out from their bodies. When the quills are in this position, they become easier to detach from the body, especially when a porcupine swings its tail toward an attacker. The barbs at the tail tip become lodged in the flesh of an attacker and are difficult and painful to remove. The quills are normally flattened against the body and in this position are less easily dislodged.