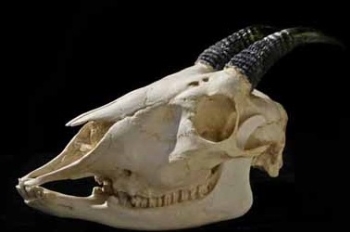 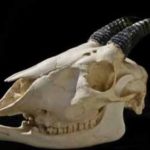 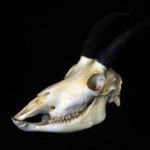 American Mountain Goat Skulls Replicas Models
0 out of 5
( There are no reviews yet. )

The mainland serow possesses guard hairs on its coat that are bristly and cover the layer of fur closest to its skin. The animal has a mane that runs from the horns to the middle of the dorsal aspect of the animal between the scapulae covering the skin. The horns are only characteristic of the males and are light-colored, approximately six inches in length, and curve slightly towards the animal’s back. The mainland serow is quite large and has been known to grow to be six feet long and three feet high at the shoulder, and an adult typically weighs over 150 kg. The Mainland Serow inhabits steep, rugged hills. It prefers rocky terrain but is also found in forests and flat areas. It is able to swim to small offshore islands. This species has a moderate level of tolerance to human disturbance, and could persist well in habitat fragments and secondary forests. The mainland serow is territorial and lives alone or in small groups.

It usually stays in a very small area of only a few square miles where it grazes on grass, shoots and leaves from along beaten paths. It marks its territory with droppings and markings. It is most active at dawn and dusk, and spends the rest of the day in thick vegetation resting. The mainland serow gives birth to a single young usually in September or October. The gestation period is about eight months.