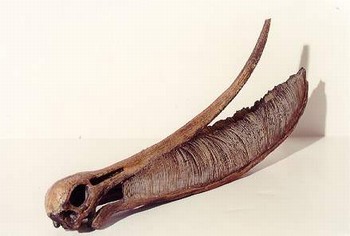 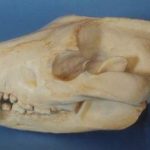 Tasmanian Devil Skulls Replicas Models
0 out of 5
( There are no reviews yet. )

Pterodaustro is a genus of Cretaceous pterodactyloid pterosaur from South America, which lived 105 million years ago.

Pterodaustro has a very elongated skull, up to 29 centimeters long. The portion in front of the eye sockets comprises 85% of skull length. The long snout and lower jaws curve strongly upwards; the tangent at the point of the snout is perpendicular to that of the jaw joint. Pterodaustro has about a thousand bristle-like modified teeth in its lower jaws that might have been used to strain crustaceans, plankton, algae, and other small creatures from the water. These teeth stand for the most part not in separate alveoli but in two long grooves parallel to the edges of the jaw. They have a length of three centimetres and are oval in cross-section, with a width of just 0.2–0.3 millimeters.

At first it was suspected these structures were not true teeth at all, but later research established they were built like normal teeth, including enamel, dentine and a pulp. Despite being made of very hard material, they might still have been flexible to some extent due to their extreme length-width ratio, a bend of up to 45° being possible. The upper jaws also carried teeth, but these were very small with a flat conical base and a spatula-formed crown. These teeth also do not have separate tooth sockets but were apparently held by ligaments in a special tooth pad, that was also covered with small ossicles, or bone plates.

The back of the skull was also rather elongated and in a low position. Pterodaustro had an adult wingspan of approximately 8.20 ft. Its hind limbs are rather robust and its feet large. Its tail is uniquely elongated for a pterodactyloid, containing 22 caudal vertebrae.