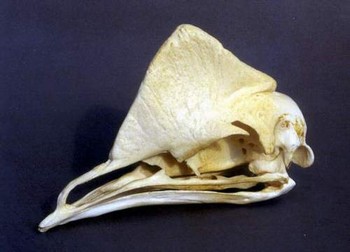 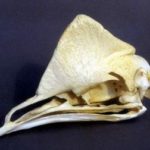 The southern cassowary has stiff, bristly black plumage, a blue face and long neck, red on the cape and two red wattles measuring around 7.0 in. in length hanging down around its throat. A horn-like brown casque, measuring 5.1 to 6.7 in. high, sits atop the head. The bill can range from 3.9 to 7.5 in. The three-toed feet are thick and powerful, equipped with a lethal dagger-like claw up to 4.7 in. on the inner toe. The plumage is sexually mono-morphic, but the female is dominant and larger with a longer casque, larger bill and brighter-colored bare parts. The juveniles have brown longitudinal striped plumage.

It forages on the forest floor for fallen fruit and is capable of safely digesting some fruits toxic to other animals. It also eats fungi, and some insects and small vertebrates. The southern cassowary is a solitary bird, which pairs only in breeding season, in late winter or spring. The male builds a nest on the ground, a mattress of herbaceous plant material 2–4 in. thick and up to 39 in. wide. This is thick enough to let moisture drain away from the eggs. The male also incubates the eggs and raises the chicks alone. A clutch of three or four eggs are laid measuring by 5.4 in × 3.7 in. They have a granulated surface and are initially bright pea-green in color although they fade with age.

Cassowaries make a booming call during mating season and hissing and rumblings otherwise. Chicks will make frequent high-pitches whistles to call the male. The cassowary may become aggressive and use its blade-like claws to kill humans or dogs when provoked.