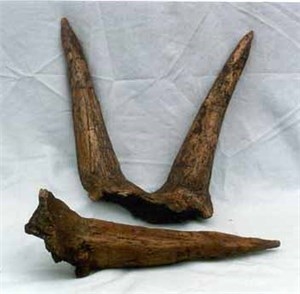 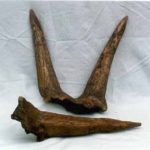 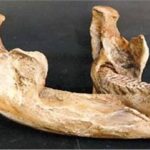 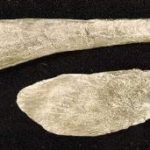 Stegosaurus Dinosaur Armor plate Replica Model
0 out of 5
( There are no reviews yet. )

Triceratops had a large skull relative to its body size. The front of the head was equipped with a high toothless beak. The core of the top beak was formed by a special rostral bone. Behind it, the premaxillae bones were located, embayed from behind by very large circular nostrils. Triceratops differs from most relatives in that this process was hollowed out on the outer side. Behind the toothless premaxilla, the maxilla bore thirty-six to forty tooth positions, in which three to five teeth per position were vertically stacked. The teeth were closely appressed, forming a “dental battery” curving to the inside. The skull bore a single horn on the snout, above the nostrils. In Triceratops, the nose horn is sometimes recognizable as a separate ossification, the epinasal. The skull also featured a pair of “brow” or supraorbital horns approximately 1 m (3.3 ft) long, with one above each eye. The jugal bones pointed to below at the rear sides of the skull and were capped by separate epijugals. With Triceratops these were not particularly large and sometimes touched the quadratojugals. The bones of the skull roof were fused. By a folding of the frontal bones, a “double” skull roof was created. In Triceratops, some specimens show a fontanelle, an opening in the upper roof layer. The cavity between the layers invaded the bone cores of the brow horns.

At the rear of the skull, the outer squamosal bones and the inner parietal bones grew into a relatively short, bony frill, adorned with epoccipitals in young specimens. These were low triangular processes on the frill edge, representing separate skin ossifications or osteoderms. Typically, with Triceratops specimens there are two epoccipitals present on each parietal bone, with an additional central process on their border. Each squamosal bone had five processes. Most other ceratopsids had large parietal fenestrae, openings, in their frills, but those of Triceratops were noticeably solid, unless the genus Torosaurus represents mature Triceratops individuals. Under the frill, at the rear of the skull, a huge occipital condyle, up to 106 millimetres in diameter, connected the head to the neck.

The lower jaws were elongated and met at their tips in a shared epidentary bone, the core of the toothless lower beak. In the dentary bone, the tooth battery curved to the outside to meet the battery of the upper jaw. At the rear of the lower jaw, the articular bone was exceptionally wide, matching the general width of the jaw joint.