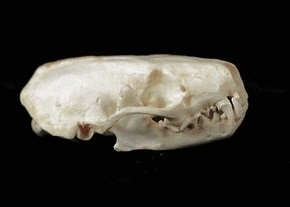 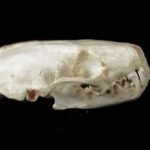 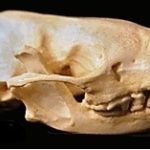 Hog Nosed Skunk Skull Replica
0 out of 5
( There are no reviews yet. )

Western Spotted Male Skunk Skull Replica measures 2.2 x 1.6 x 1. The Western Spotted Male Skunk Skull Replica is Museum quality cast in Polyurethane resins. Made in USA. Cast from original specimen. Spilogale gracilis. The Western Spotted Skunk is smaller than the Striped Skunk. Found throughout the Western United States, Northern Mexico, and Southwestern British Columbia.  The adult is boldly striped black and creamy white, with three longitudinal stripes on each side of the front part of the body, and three vertical stripes on the hind-parts. One pair of longitudinal stripes runs either side of the spine, with the second pair running over the shoulders, and extending forward onto the face. The third pair is lower over the shoulders, and curves downward at the middle of the body to form the first pair of vertical stripes. Behind this, the second pair of vertical stripes rise from the knees to the rump, while the final stripes are often little more than spots.

The ears are short and rounded, while the face is marked with a white spot between the eyes, and a white patch below each ear. The animal has a conspicuously large, long-haired tail, measuring 3.9 to 6.3 in. The hair on the tail is mostly black, but is white at the tip, and sometimes also on the upper surface. The claws on the fore-feet are longer, and more curved, than those on the hind feet.

Western spotted skunks are nocturnal omnivores, feeding on insects, small vertebrates, such as mice and lizards, and berries. Common insects eaten include beetles and caterpillars. However, they have been found to consume prey as large as the ashy storm petrel. Populations close to these animals often have decreased pest populations. They have even been reported to consume scorpions in the southwest.