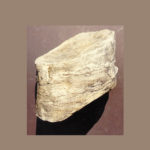 Calamites Tree Trunk Fossil
0 out of 5

Bigfoot, also called Sasquatch, is believed to be a large ape-like hominid that inhabits various parts of North America. Despite the various photographs, films and eyewitness reports, this creature has yet to be proven to exist and is generally considered to be a legend. Until hard evidence surfaces, such as a carcass or captured animal, science will have to rely on the cast footprints as our only proof. These casts were acquired from a Bigfoot researcher and are said to be authentic.