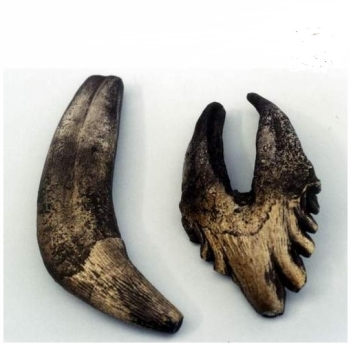 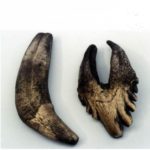 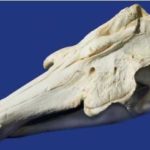 Narwhal Skull Replica
0 out of 5
( There are no reviews yet. )

Zygorhiza Whale Molar measures 105mm or 4.1 inches. The Zygorhiza Whale Molar is a Museum quality replicas cast in durable Polyurethane resins. Made in USA. Zygorhiza is an extinct genus of basilosaurid early whale known from the Late Eocene of Louisiana, Alabama, and Mississippi, United States, and the Bortonian to the late Eocene of New Zealand (43 to 33.9 million years ago).
Zygorhiza had a body similar to modern cetaceans with flipper-like forelimbs, rudimentary hind limbs, a vertebral column adapted for oscillatory swimming, and a tail fluke. Zygorhiza replaced their upper and lower deciduous first premolars with permanent teeth. This is very unusual in modern mammals and contrasts to extant toothed whales that only develop a single set of teeth. It might indicate that Zygorhiza represents a stage in archaeocete evolution where skeletal maturation was delayed like in modern cetaceans. Zygorhiza differs from all other dorudontines in the presence of well-developed cuspules on the cingula of the upper premolars.