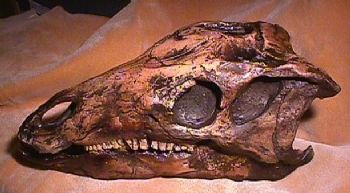 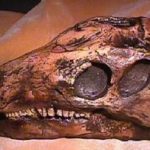 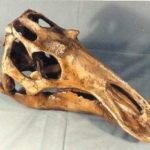 Maiasaura Juvenile Dinosaur Skull Replica
0 out of 5
( There are no reviews yet. )

Camptosaurus (genus Camptosaurus) is a large herbivorus dinosaur found as fossils in Western Europe and Western North America that lived from the Late Jurassic Period to the Early Cretaceous Period.

Camptosaurus is a relatively heavily built form, with robust hindlimbs and broad feet, still having four toes. Due to the separate status of Uteodon it has become problematic which material from the Morrison belongs to Camptosaurus. The specimens with certainty belonging to Camptosaurus dispar, from Quarry 13, have been recovered from very deep layers, probably dating to the Callovian-Oxfordian. The largest fragments from later strata indicate adult individuals more than 7.9 metres (26 ft) long, and 2 metres (6.6 ft) at the hips. The Quarry 13 individuals are smaller though. They have been described as reaching 6 meters (19.7 feet) in length and 785 – 874 kg in weight. In 2010 Gregory S. Paul gave an even lower estimate: a length of five metres and a weight of half a tonne.

Earlier reconstructions, such as those by Marsh and Gilmore, were based on the skull of Theiophytalia and display an incorrect, more rectangular profile. The skull was in fact triangular with a pointed snout, equipped with a beak. Its teeth were more tightly packed in the jaw compared to other Morrison euornithopods. Museum curator John Foster describes them as having “thick median ridges on their lateral sides and denticles along their edges,” these features were similar to, but “more fully developed” than those in Dryosaurus. Camptosaurus teeth frequently exhibit extensive wear, which indicates that individuals in the genus had a diet of relatively tough vegetation.

Based on studies of other iguanodonts (clade Iguanodontia), scientists believe they may have been able to achieve running speeds of 25 km per hour (15 mph). A tiny 9 inch fossilized embryo, referred to Camptosaurus, was retrieved from Morrison Formation strata at Dinosaur National Monument in Utah.