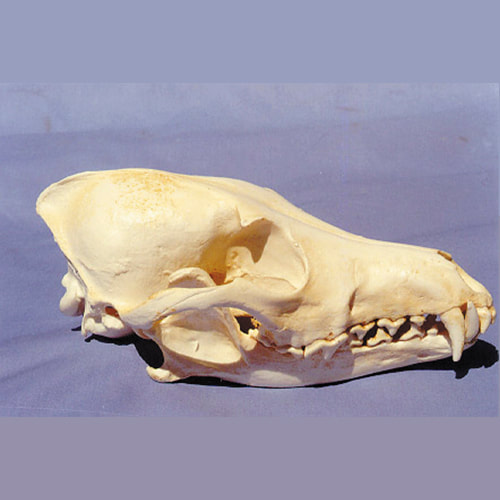 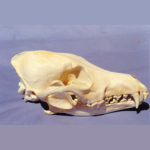 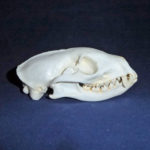 Jacksons Mongoose Skull Replica
0 out of 5
( There are no reviews yet. )

The Coyote or Canis latrans is a canine native to North America. It is smaller than its close relative, the gray wolf, and slightly smaller than the closely related eastern wolf and red wolf. It fills much of the same ecological niche as the golden jackal does in Eurasia, though it is larger and more predatory, and is sometimes called the American jackal by zoologists. Other names for the species, largely historical, include prairie wolf and brush wolf.

Coyote or Canis latrans males average 18 to 44 lbs. in weight, while females average 15 to 40 lbs. Body length ranges on average from 3 ft 3 in to 4 ft 5 in., and tail length 16 in., with females being shorter in both body length, height and smaller skull. Canis latrans scent glands are located at the upper side of the base of the tail and are a bluish black color.

The color and texture of Canis latrans fur varies somewhat geographically. The hair’s predominant color is light gray and red interspersed around the body with black and white. Adult coyotes have a sable dark neonatal coat, bushy tail and a white facial mask.

Canis latrans has longer ears and a relatively larger skull, as well as a thinner frame, face, and muzzle. Its fur color variation is much less varied than that of a wolf. The coyote also carries its tail downwards when running or walking.