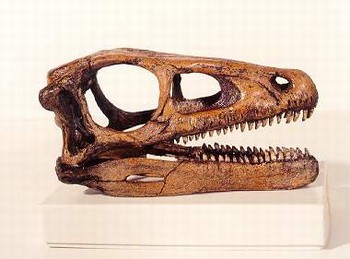 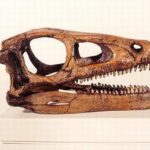 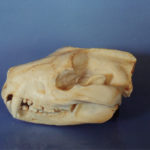 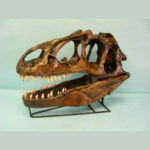 Allosaurus Fragilis Dinosaur Skull
0 out of 5
( There are no reviews yet. )

Eoraptor lunensis is a genus of small, lightly-built, basal saurischian dinosaur. One of the earliest-known dinosaurs, it lived approximately 231 to 228 million years ago, during the Late Triassic in Western Gondwana, in the region that is now northwestern Argentina. The type and only species, Eoraptor lunensis, was first described in 1993, and is known from several well-preserved skeletons. They had heterodont dentition, which suggests that it was omnivorous.

Eoraptor lunensis had a slender body that grew to about 3 ft. 3 in. in length, with an estimated weight of about 22 lbs. It had a lightly built skull with a slightly enlarged external naris. Like the coelophysoids which would appear millions of years later, Eoraptor lunensis had a kink in its upper jaws, between the maxilla and the premaxilla.

Eoraptor lunensis had five digits on each ‘hand’, the three longest of which ended in large claws and were presumably used to handle prey. Scientists have surmised that the fourth and fifth digits were too tiny to be of any use in hunting. The ilium is supported by three sacral vertebrae, unlike that of the coeval Herrerasaurus which is supported by only two sacrals, a basal trait. Eoraptor lunensis had vertebral centra that are hollow, a feature present in some of its ancestors.