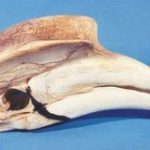 The great-hornbill or Buceros bicornis is a large bird at 37 to 51 in. long, with a 60 in. wingspan and a weight of 4.4 to 8.8 lbs. The average weight of 7 males was 6.6 lbs. whereas that of 3 females was 5.7 lbs. It is the heaviest, but not the longest. Females are smaller than males and have bluish-white instead of red eyes, although the orbital skin is pinkish. Like other hornbills, they have prominent eyelashes.

The most prominent feature of the great-hornbill or Buceros bicornis is the bright yellow and black casque on top of its massive bill. The casque appears U-shaped when viewed from the front, and the top is concave, with two ridges along the sides that form points in the front, whence the Latin species epithet bicornis (two-horned). The back of the casque is reddish in females, while the underside of the front and back of the casque is black in males.

The casque is hollow and serves no known purpose, although it is believed to be the result of sexual selection. Great-hornbill  or Buceros bicornis males have been known to indulge in aerial casque butting, with birds striking each other in flight. The male spreads the preen gland secretion, which is yellow, onto the primary feathers and bill to give them the bright yellow color. The commissure of the beak is black and has a serrated edge which becomes worn with age.

The wing beats are heavy and the sound produced by birds in flight can be heard from a distance. This sound has been likened to the puffing of a steam locomotive starting up. The flight involves stiff flaps followed by glides with the fingers splayed and upcurled. The great-hornbill or Buceros bicornis sometimes fly at great height over forests.