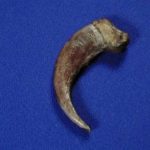 The grizzly bear or Ursus arctos ssp., or Ursus arctos horribilis), also known as the North American brown bear or simply grizzly, is a large population or subspecies of the brown bear inhabiting North America. Most adult female grizzlies weigh 290–400 lbs., while adult males weigh on average 400–790 lbs.  Average total length is 6.50 ft., with an average shoulder height of 3.35 ft. and hind foot length of 11 in. Newborn bears may weigh less than 1.1 lbs.

Although variable in color from blond to nearly black, grizzly bear or Ursus arctos fur is typically brown with darker legs and commonly white or blond tipped fur on the flank and back. A pronounced muscular hump appears on adult grizzlies shoulders. A grizzly bear’s front claws measure about 2–4 inches in length.

Although the once-abundant grizzly bear or Ursus arctos appears prominently on the state flag of California and was the symbol of the Bear Flag Republic before California’s admission to the Union, they are no longer naturally present. The last grizzly in all of California was killed in the Sierra foothills east of Fresno in August 1922.

In September 2007, a hunter produced evidence of one bear in the Selway-Bitterroot Wilderness ecosystem, by killing a male grizzly bear there. In the North Cascades ecosystem of northern Washington, grizzly bear populations are estimated to be fewer than 20 bears. One sighting of a grizzly bear or Ursus arctos in 2010 has been recorded.