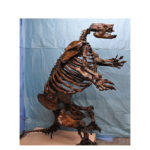 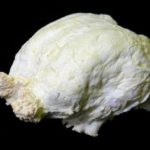 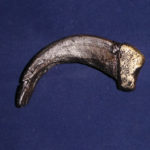 Harlans ground sloth or Paramylodon harlani was a massive, powerfully built animal, with an enormous chest, extremely large forelimbs, stout hind limbs, strong claws, short neck and a robust tail. It also had an elongated head with blunt nose and flat grinding teeth. As with other sloths, the teeth had an outer layer of dentine, rather than enamel. Soft teeth wear down faster than hard teeth, and to compensate for this, their teeth continued to grown throughout their lifetime. The skull showed a number of characters similar to that of Mylodon harlani , which was also known from North America, but differed in the number of teeth present in the maxilla.

Paramylodon harlani is an extinct genus of ground sloth of the family Mylodontidae endemic to North America during the Pliocene through Pleistocene epochs, living from around 4.9 million years ago to 11,000 years ago. It is also known as Harlans ground sloth.

Paramylodon harlani measured about 9.8 ft. in length and weighed as much as 1,000 to 1,089 kg. It is known from North America deposits, including in Mexico and the United States and as far south as Guatemala, and often mistaken as Glossotherium. Currently there is just one recognized species, P. harlani, (Owen) 1840, which is commonly referred to as Harlans ground sloth in honor of American paleontologist Dr. Richard Harlan, who first discovered and described a lower jaw in 1835.

Paramylodon harlani exhibits the interesting characteristic of having had dermal ossicles, small bones embedded in the skin, presumably adding a degree of protection to the animal. This characteristic is also shared by the South American Mylodon.

A Paramylodon harlani specimen was identified from the Tarkio Valley site in Iowa association with Megalonyx jeffersoni. This is the first occurrence of Paramylodon in Iowa, and probably the first time these species have been found in close association. These two species have since been uncovered at the Fairmead Landfill Site and Irvington Site in California.