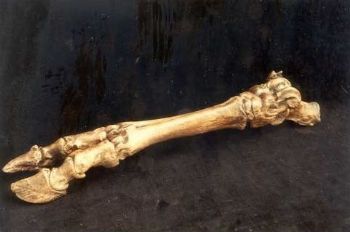 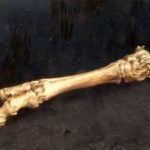 Giant Bison Fossil Skulls Replica Model
0 out of 5
( There are no reviews yet. )

Pleistocene Bison Forefoot Replica measures 24 inches x 3 3/4 inches x 3 3/4 inches. Pleistocene Bison Forefoot Replica is cast in polyurethane resins, museum quality and made in the USA. Bison antiquus, the ancient or antique bison, is an extinct species of bison that lived in North America until around 10,000 years ago. It was one of the most common large herbivores on the North American continent during the late Pleistocene, and is a direct ancestor of the living American bison.
During the later Pleistocene epoch, between 240,000 and 220,000 years ago, steppe wisent (B. priscus) migrated from Siberia into Alaska across the Bering Land Bridge. Bison priscus inhabited northern North America throughout the remainder of the Pleistocene. In western North America, B. priscus evolved into long-horned bison, B. latifrons, which then evolved into B. antiquus. The larger B. latifrons appears to have died out by about 20,000 years ago. After the extinction of B. latifrons, B. antiquus became increasingly abundant in parts of midcontinent North America from 18,000 until about 10,000 years ago, after which the species appears to have given rise to the living species, B. bison. B. antiquus is the most commonly recovered large mammalian herbivore from the La Brea tar pits.

B. antiquus was taller, had larger bones and horns, and was 15-25% larger overall than modern bison. It reached up to 2.27 m (7.5 ft) tall, 4.6 m (15 ft) long, and a weight of 1,588 kg (3500 lb). From tip to tip, the horns of B. antiquus measured about 3 ft (nearly 1 m).
One of the best educational sites to view in situ semi fossilized skeletons of over 500 individuals of B. antiquus is the Hudson-Meng archeological site operated by the U.S. Forest Service, northwest of Crawford, Nebraska. A number of paleo-Indian spear and projectile points have been recovered in conjunction with the animal skeletons at the site, which is dated around 9,700 to 10,000 years ago.