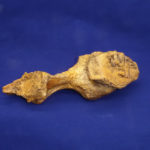 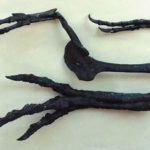 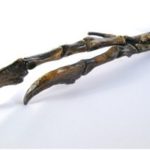 Albertosaurus Dinosaur Hand Replica
0 out of 5
( There are no reviews yet. )

Tyrannosaurus Rex is a genus of coelurosaurian theropod dinosaur. The species Tyrannosaurus rex (rex meaning “king” in Latin), often called T. rex or T-Rex, is one of the most well-represented of the large theropods. Tyrannosaurus lived throughout what is now western North America, on what was then an island continent known as Laramidia. Tyrannosaurus had a much wider range than other tyrannosaurids. Fossils are found in a variety of rock formations dating to the Maastrichtian age of the upper Cretaceous Period, 68 to 66 million years ago.

Tyrannosaurus rex was one of the largest land carnivores of all time. One of the largest and the most complete specimens, nicknamed Sue (FMNH PR2081), is located at the Field Museum of Natural History. Sue measured 40–42 ft. long, was 12 ft. tall at the hips, and estimated to have weighed between 9.3 short tons. A specimen nicknamed Scotty (RSM P2523.8), located at the Royal Saskatchewan Museum, is reported to measure 43 ft. in length.

The largest known Tyrannosaurus rex skull is 5 ft. in length. Large openings in the skull reduced weight. Tyrannosaurus’s skull was significantly different from those of large non-tyrannosaurid theropods. It was extremely wide at the rear but had a narrow snout, allowing unusually good binocular vision. The skull bones were massive and the nasals and some other bones were fused, preventing movement between them; but many contained a “honeycomb” of tiny air spaces and thus lighter. These and other skull-strengthening features are part of the tyrannosaurid trend towards an increasingly powerful bite, which easily surpassed that of all non-tyrannosaurids. The tip of the upper jaw was U-shaped increased the amount of tissue and bone a tyrannosaur could rip out with one bite, although it also increased the stresses on the front teeth.