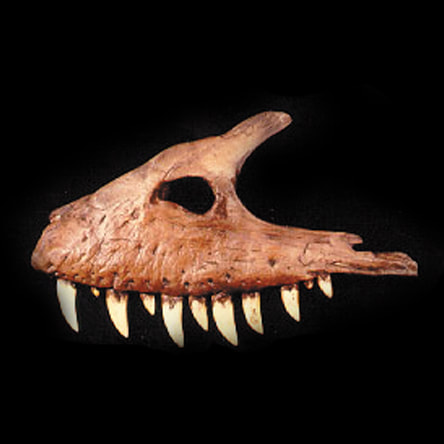 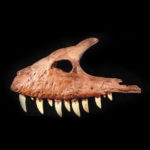 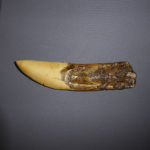 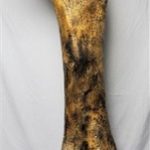 Apatosaurus Femur BYU Replica
0 out of 5
( There are no reviews yet. )

Albertosaurus sarcophagus was about 30 feet long, about 11 feet tall at the hips, and up to 3 tons in weight. The lower jaw of Albertosaurus had from 14 and 16 teeth; the upper jaw had 17-19 teeth. It had one row of teeth in each jaw but had at least one replacement tooth growing up from under each tooth.

The massive skull of Albertosaurus sarcophagus, which was perched on a short, S-shaped neck, was about 3.3 feet long in the largest adults. Wide openings in the skull (fenestrae) reduced the weight of the head while also providing space for muscle attachment and sensory organs.

Albertosaurus sarcophagus long jaws contained, both sides combined, 58 or more banana-shaped teeth. Unlike most theropods, Albertosaurus and other tyrannosaurids were heterodont, with teeth of different forms depending on their position in the mouth. The premaxillary teeth at the tip of the upper jaw, four per side, were much smaller than the rest, more closely packed, and D-shaped in cross section. The maxillary (cheek) teeth of Albertosaurus were adapted in general form to resist lateral forces exerted by a struggling prey.

The bite force of Albertosaurus sarcophagus was less formidable, however, with the maximum force, by the hind teeth, reaching 3,413 Newtons. Above the eyes were short bony crests that may have been brightly coloured in life and used in courtship to attract a mate.