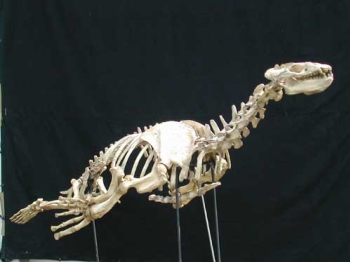 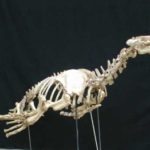 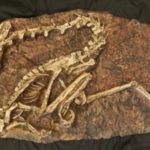 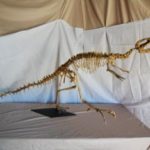 Velociraptor osmolkae Dinosaur Skeleton Replica
0 out of 5
( There are no reviews yet. )

Allodesmus is an extinct genus of pinniped from the middle to late Miocene of California and Japan that belongs to the extinct pinniped family Desmatophocidae.
Allodesmus measured about 8 feet (2.4 m) long and weighed 800 pounds (360 kg). Allodesmus had the specific anatomical features found in modern polygynous pinnipeds: strong canines for fights between bulls and teeth with well-defined growth zones, a result from periodic fasting (in order to defend their harem, males would not take to the sea to feed during the breeding season).

Fossil remains of this genus have been collected in Orange County in southern California and near Ensenada in Baja California. Thousands of isolated bones of Allodesmus have been found in the Miocene-age Sharktooth Hill Bonebed near Bakersfield, suggesting that this extinct pinniped lived in large social groups.
Allodesmus was a large seal-like pinniped that lived in the north Pacific Ocean region during the middle and late Miocene 15 to 10 million years ago. At least three species of Allodesmus are known from California and one from Japan during this time period.

Allodesmus had a large, narrow skulls, but its teeth were relatively simple with bulbous-shaped crowns. It swam with its forelimbs and could rotate its hind limbs forward and “walk” while on land. Allodesmus had very large eyes which helped it to see underwater, the ears of Allodesmus were only somewhat adapted to hearing underwater. The teeth of Allodesmus vary only in size; they are all alike in shape and are well-suited for fish eating. Allodesmus was an active swimmer and predator.