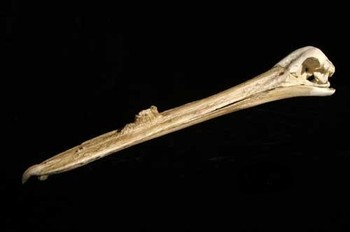 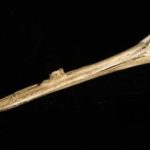 The American white pelican or Pelecanus erythrorhynchos is a large aquatic soaring bird from the order Pelecaniformes. It breeds in interior North America, moving south and to the coasts, as far as Central America and South America, in winter.

The American white pelican or Pelecanus erythrorhynchos rivals the trumpeter swan, with a similar overall length, as the longest bird native to North America. The species has the second largest average wingspan of any North American bird, after the California condor. This large wingspan allows the bird to easily use soaring flight for migration. Body weight can range between 7.7 and 30 lbs. Among standard measurements, the wing chord measures 50 to 68 cm and the tarsus measures 3.9 to 5.4 ins.

The plumage is almost entirely bright white, except the black primary and secondary remiges. From early spring until after breeding has finished in mid-late summer, the breast feathers have a yellowish hue. After molting into the eclipse plumage, the upper head often has a grey hue, as blackish feathers grow between the small wispy white crest.

The American white pelican or Pelecanus erythrorhynchos bill is huge and flat on the top, with a large throat sac below, and, in the breeding season, is vivid orange in color as are the iris, the bare skin around the eye, and the feet. In the breeding season, there is a laterally flattened “horn” on the upper bill, located about one-third the bill’s length behind the tip. This is the only one of the eight species of pelican to have a bill “horn”. The Pelecanus erythrorhynchos horn is shed after the birds have mated and laid their eggs.

Outside the breeding season the Pelecanus erythrorhynchos bare parts become duller in color, with the naked facial skin yellow and the bill, pouch, and feet an orangy flesh color.