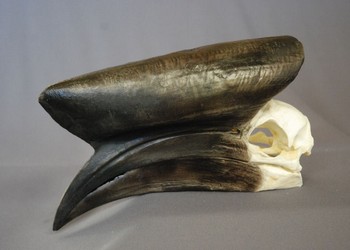 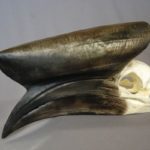 The Ceratogymna atrata, more commonly known as the black-casqued hornbill, is a bucerotiforme bird from the Bucerotidae family. It has beautiful black feathers and the tip of its tail is white. They have a solid helmet-like structure on its head, which is gray with flecks of silver, as well as its peculiar unruly crest or wig.

The black-casqued hornbill or Ceratogymna atrata mainly eats fruit. Around 85 percent of its diet is vegetarian. It also feeds on some insects such as ants and small vertebrates.

In the wild, Ceratogymna atrata form pairs or small family groups. These birds make their nests in holes high up in the trees, sometimes more than 66 feet above the ground. They time mating season so that it coincides with periods of greater abundance of food. In times of scarcity, black-casqued hornbills reduce the number of eggs they produce or simply stop reproducing.

Prior to courting the Ceratogymna atrata pairs make a nest where the female will remain protected during the incubation of the eggs and until the young are ready to go out into the world.

It is the father who is in charge of providing food. They are monogamous birds. They stay with the same partner for life.