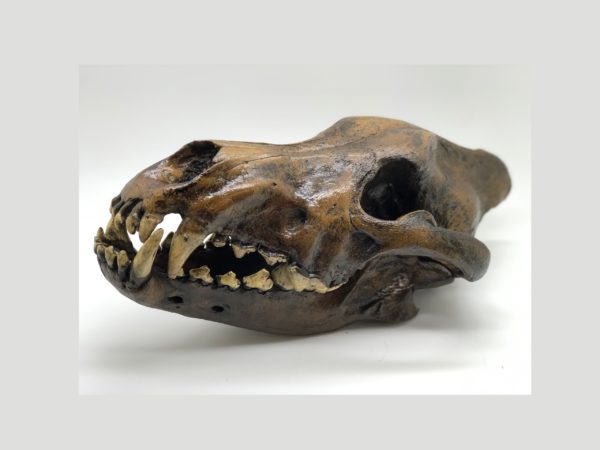 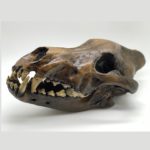 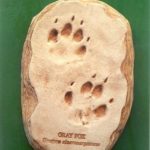 Gray Fox Footprint Replica
0 out of 5
( There are no reviews yet. )

The dire wolf or Canis dirus, “fearsome dog” is an extinct species of the genus Canis. The dire wolf lived in the Americas and China during the Late Pleistocene and Early Holocene epochs (125,000 to 9,500 years ago). The species was named in 1858, four years after the first specimen had been found. The largest collection of its fossils has been obtained from the Rancho La Brea Tar Pits in Los Angeles.

Dire wolf or Canis dirus remains have been found across a broad range of habitats including the plains, grasslands, and some forested mountain areas of North America, and in the arid savannah of South America.

They were about the size as the largest modern gray wolves. Its skull and dentition matched those of C. lupus, but its teeth were larger with greater shearing ability, and its bite force at the canine tooth was the strongest of any known Canis species. These characteristics are thought to be adaptations for preying on Late Pleistocene megaherbivores, and in North America its prey are known to have included horses, ground sloths, mastodons, bison, and camels. The dire wolf or Canis dirus is thought to have been a pack hunter. Its extinction occurred during the Quaternary extinction event along with most of the American megafauna of the time. Canis dirus reliance on megaherbivores has been proposed as the cause of its extinction, along with climate change and competition with other species, but the cause remains controversial. Dire wolves or Canis dirus lived as recently as 9,500 years ago, according to dated remains.