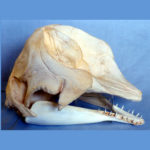 Melon-Headed Whale Skull Replica
0 out of 5
( There are no reviews yet. )

The dwarf sperm whale or Kogia sima is a sperm whale that inhabits temperate and tropical oceans worldwide, in particular continental shelves and slopes. The dwarf sperm whale is a small whale, 6 ft. 7 in. to 8 ft. 10 in. and 300 to 600 lbs., that has a gray coloration, square head, small jaw, and robust body.

Dwarf sperm whale or Kogia sima is a suction feeder that mainly eats squid, and does this in small pods of typically 1 to 4 members. It is preyed upon by the killer whale and large sharks such as the great white shark . When startled, the whale can eject a cloud of red-brown fluid, similar to a squid.

Dwarf sperm whale or Kogia has a dark-gray or blue-gray coloration with a lighter-gray underside, and a pale, crescent-shaped mark between the eye and the flipper. Some Dwarf sperm whale or Kogia have been known to have a second crescent-shaped mark, creating a sort of pale ring encircling a darker spot. It has a high dorsal fin halfway down the length of the body, and two or more throat grooves. The dorsal fin is taller and closer to the head than it is in the pygmy sperm whale, and the back is flatter.

Dwarf sperm whale or Kogia is identified as having a square head, a small jaw with the snout jutting outward, and a porpoise-like build with a robust body that rapidly decreases towards the tail. They have the shortest snouts of any modern day whale.

The left nostril is markedly larger than the right, and it has a spermaceti organ on its skull. The eyes are adapted for low light environments. The Dwarf sperm whale or Kogia has 14 to 24 teeth in the lower jaw that are sharp, slightly curved backwards lack enamel. The teeth rarely exceed 1.2 in. in length. At most, 6 teeth are in the upper jaws.