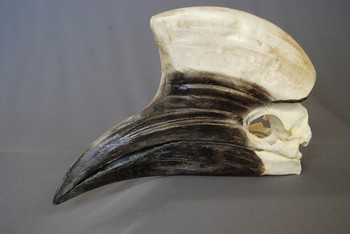 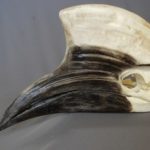 The yellow-casqued hornbill or Ceratogymna elata live in small family groups containing at least one adult male and female, with one or two immature birds, though they sometimes gather in larger flocks to exploit a major food supply such as an ant or termite nest.

The yellow-casqued hornbill or Ceratogymna elata are occasionally preyed upon by crowned hawk eagles, and they respond to the presence o by mobbing, approaching it and emitting calls. Since the eagles depend on surprise to make a catch, this frequently causes them to leave the area. These birds respond in the same way to the alarm calls that Diana monkeys, which live in the same areas, emit if they notice them, and that they can distinguish the calls made by the monkeys from those they make in the presence of leopards, which prey on the monkeys but not on the hornbills.

Hunting is likely to be a major threat throughout its range and, in Ghana, over hunting is probably causing a serious decline. Logging is probably only a threat to the species in small forests where hunting is rampant, but destruction of forest throughout its range is causing habitat fragmentation, resulting in the increasing isolation of large fragments, which may inhibit movement between seasonal food sources and lead to a reduction in its population.