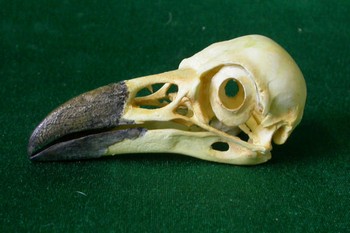 The common raven or Corvus corax is the most widely distributed of all corvids. It is one of the two largest corvids, alongside the thick-billed raven, and is possibly the heaviest passerine bird; at maturity, the common raven averages 25 inches in length and 2.6 pounds in mass. Common ravens can live up to 21 years in the wild.

Common ravens have coexisted with humans for thousands of years and in some areas have been so numerous that people have regarded them as pests. Part of their success as a species is due to their omnivorous diet; they are extremely versatile and opportunistic in finding sources of nutrition, feeding on carrion, insects, cereal grains, berries, fruit, small animals, nesting birds, and food waste.

Fifteen to 30 categories of vocalization have been recorded for this species, most of which are used for social interaction. Calls recorded include alarm, chase, and flight calls. Corvus corax has a distinctive, deep, resonant prruk-prruk-prruk call, which to experienced listeners is unlike that of any other corvid.  Corvus corax has a very wide and complex vocabulary includes a high, knocking toc-toc-toc, a dry, grating kraa, a low guttural rattle and some calls of an almost musical nature.

Some notable feats of problem-solving provide evidence that the common raven is unusually intelligent. Over the centuries, it has been the subject of mythology, folklore, art, and literature.