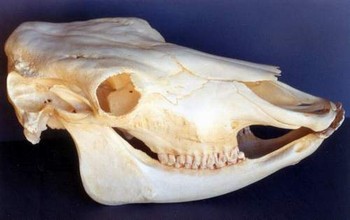 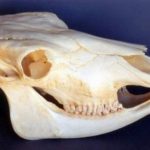 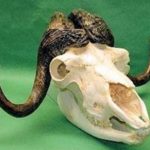 Muskox Adult Male Skull
0 out of 5
( There are no reviews yet. )

Domestic Cow or Bos taurus, the domestic bovine, also commonly known as cow or cattle, can be found ranched worldwide as a source of food. In bovids, “cow” usually denotes a female. However, in the case of domestic cattle, “cow” can be used to refer to both males and females. Bos taurus are grazers feeding on a variety of grains and vegetation. Bos taurus descended from the Aurochs, an ancient wild bovine from Asia and Europe. Remains of domesticated cattle have been found dating back to 6,500 B.C.

Domestic Cow or Bos taurus are large quadrupedal ungulate mammals with cloven hooves. Most breeds have horns, which can be as large as the Texas Longhorn or small like a scur. Careful genetic selection has allowed polled (hornless) Bos taurus to become widespread.

Domestic Cow or Bos taurus are commonly raised as livestock for meat, for milk, and for hides, which are used to make leather. Domestic Cow or Bos taurus are used as riding animals and draft animals (oxen or bullocks, which pull carts, plows and other implements). Another product of Bos taurus is their dung, which can be used to create manure or fuel. In some regions, such as parts of India, cattle have significant religious meaning. Cattle, mostly small breeds such as the Miniature Zebu, are also kept as pets.

Around 10,500 years ago, cattle were domesticated from as few as 80 progenitors in central Anatolia, the Levant and Western Iran. There are approximately 1.5 billion cattle in the world as of 2018. In 2009, cattle became one of the first livestock animals to have a fully mapped genome.